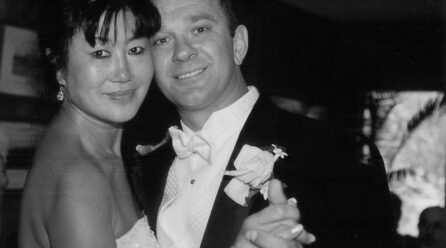 Cecelia and Jeff met in the rooms of AA in Houston, Texas. Cecelia invited him to a camp-out with friends at Lake Livingston State Park soon afterward. That night, it came a rain storm and Jeff’s tent blew down. Cecelia kindly offered Jeff a place in her tent. They were separated by a partition and talked until morning. They were rarely separated since. Jeff and Cecelia were married two years later.

After eighteen years, Jeff lost Cecelia to pancreatic cancer. Two years before her death, Jeff had quit his job as a software developer and became a full-time student again at age 54. During this time, he and Cecelia lived off of their savings. When Cecelia passed, Jeff was broke and unable to find work. A year later he was homeless and took an overdose of morphine, which left him unconscious in a hospital for three days. After his recovery, he took a series of minimum wage jobs in order to stay at a boarding house in Houston.

Eventually, Jeff was invited to stay with a friend in Columbus Ohio, close to his native home of Canton, where he found work once again as a computer programmer.

Jeff, feeling abandoned by most of his family and most of his life-long friends, fell into a deep depression. His grief worsened as he struggled to bare the stark reality that his life, as he knew it, was over and he began to write.

In these pages, you’ll see evidence of a man struggling to bear the grief for the loss of his wife, his attempts to deal with loneliness, and his disappointment as he attempted to reconnect with loved ones. You’ll witness his trials and his eventual healing, his dark moments and his return to a healthy and grateful life. Through his ordeal, Jeff stayed grateful for his blessings, as there were many in spite of his struggles.

This site will appeal to anyone suffering a loss, a battle with addiction and relationships, or readers with just a love of good poetry. “After Thoughts” is a good read for anyone who has struggled with loss and have or is trying to rebuild their life. You may find yourself in these pages.